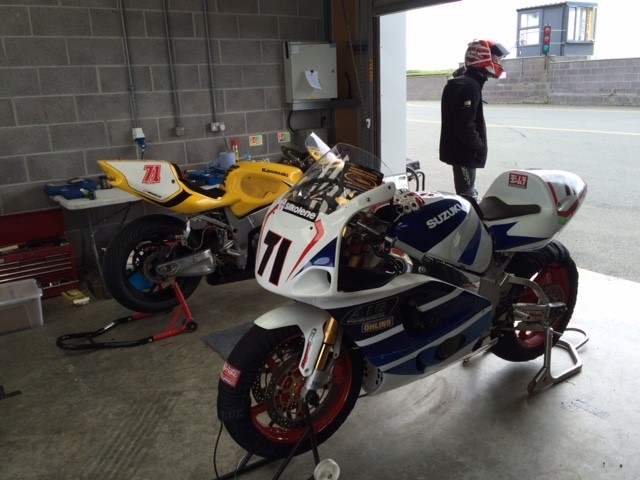 My hopes were high for good weekend’s racing when we left for Anglesey on Thursday night. We planned to get there nice and early and set up without the usual rush and to miss the Bank Holiday traffic.

Anglesey is a strong circuit for me and I was really looking forward to it, but we had a problem with the ZX-7R in practice that we couldn’t fix at the circuit. I knew it was going to be a bit of struggle from that moment on.

I heard a slight tapping sound coming from the engine after lap one of the morning session and the oil warning light suddenly came on; I immediately hit the kill switch and coasted to a halt just past bend at the end of the start-finish straight. I pushed it back to the garage feeling sick – it sounded like a big end bearing failure. After me and Dad drained the oil we could see remnants of what looked like paper towel coming out. It suddenly dawned on me that we’d left a bit of paper tissue in – to stop the oil drips – after checking the clutch earlier in the week. It had blocked the oil-intake filter in the sump. I was absolutely gutted. We all felt horribly depressed. It was all over for the Kawasaki, but thankfully not over for the weekend.

Thanks to Drew Plaskitt, who has always supported me by bringing the SRAD to all the rounds, my championship hopes were still alive. In fact, Drew couldn’t make this meeting so Vince Carlton brought the Suzuki along with him for me to use. Thank goodness!

So, it was tyre warmers on the SRAD and time to concentrate on setting this bike up for the rest of the weekend. It was really hard work at first because I couldn’t trail-brake into the corners without the bike shuddering through the font-end. It felt like chatter. We tried everything with the suspension on the front. Going to the extremes on rebound and compression to try to find out what was wrong, but it just wouldn’t settle down. At times, it was so bad I was in real fear of crashing.

Anyway, when I brought the bike into the garage and gently applied the front brake to stop, it became apparent to me that it was something to do with the front discs or pads; I could really feel it through the bars. I’d spent nearly all day on suspension, so now it was time to sort out the brakes. My Mum ran over to Sparklight Racing – double quick – to see if they had any pads, while me and Dad cleaned off the discs with wet-and-dry plus plenty of brake cleaner and, thanks to Sparklight, we were able to get some new pads to fit. I don’t think my Dad has ever put pads in so quick with literally seconds before the session started. After that, I had just one practice session left – I thought if this doesn’t work I’m really screwed here! 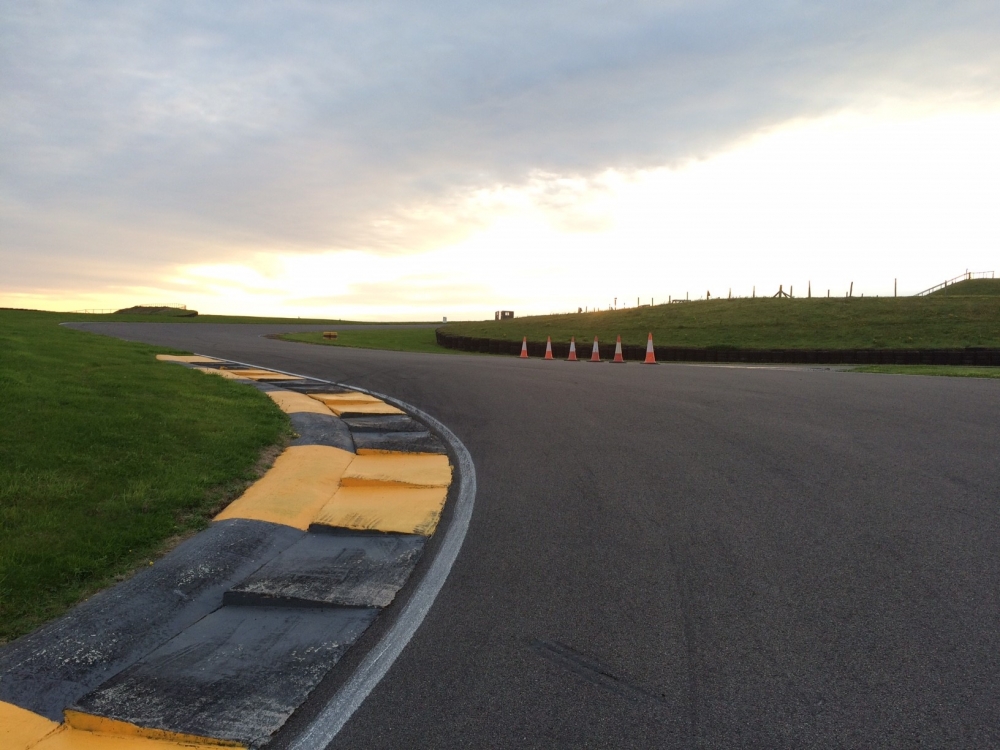 The mini corkscrew; here a back-marker would influence the outcome of the last race.

It felt much better, about 70% I’d say; not perfect, but rideable. I still had to try and think of ways to ride round it and on some of the corners I didn’t even brake, I just let it run in hot and steered using the rear tyre with the thottle. On the plus-side, I was actually learning some new lines and other ways of riding this track on the SRAD that could possibly come in useful later on. After the last session, I was still way off perfect and a few seconds off the pace. Qualifying seemed a daunting task.

That night it was hard to get to sleep thinking of where I could get the Suzuki to go quicker. In the end, I didn’t do too bad and wasn’t that far off the pace, which surprised and encouraged me at the same time. I was on the third row in 7th, on the outside line – better to be there than qualify 6th on the inside.

In race one I started well, getting alongside the GP1 Classic rider, Jon Wright, who was just in front. Then he drifted across my line and I was shut out and had to back-off as we peeled into turn one. I could see the others getting away and had to settle for a pace that I was happy with to bring it home in second place. The Honda SP2 had the legs on me down the back straight, but even though I was a few seconds adrift he wasn’t gaining much more; I was pleased that I was at least matching the pace after the problems we had had.

Race two was a much better performance for me. I got off to a livelier start and didn’t let Ryan get away; I actually managed to get in front of him down the back straight but out-braked myself soon after allowing him back past. It was a close one in the end, much closer than the previous race, just a couple of seconds behind across the line. I was surprised when the race was over, I didn’t see the last lap flag! I didn’t even see the chequered flag either and almost high-sided coming onto the start finish straight trying to get the drive. My garage pal Martin Stanier said he didn’t see the flags either. It was in a difficult place to really notice it – a few other riders said the same.

When I looked at the result sheet I saw that I’d gone faster – setting fastest lap in my class. It was just the encouragement I needed for the next day. Mega laps had calculated that not only was I starting ahead of Ryan, I was on the outside again. I was beginning to feel a bit more confident. 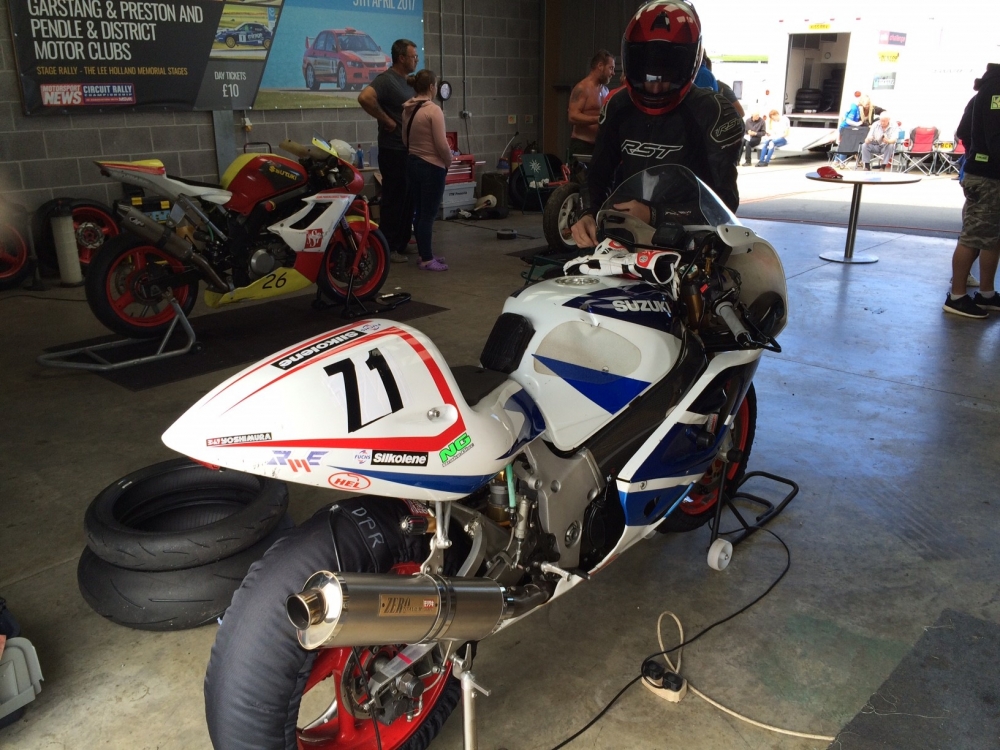 Gloves on for the warm-up session. Bike felt so much better once the brakes were sorted.

After the Monday morning warm up the bike felt good and the juddering on the front brakes seemed to disappear now that the different compound pads had fully mated with the discs. I was thinking positively about the chances of winning at least one race during the day.

The first race of the day was weird, every time I put the power on the back end it just kept spinning, and sliding. I had no grip whatsoever and I felt like I had no contact with the tarmac. The track seemed to have changed – we’d had rain overnight – and throughout the day there were many unforced errors and crashes in other classes. I had settle for a safe second, there was no way I could’ve pushed it any harder.

For the last race of the day I decided to put on a different compound rear tyre. What a difference that made, not only did I get the grip I wanted, I almost got the race win I wanted. 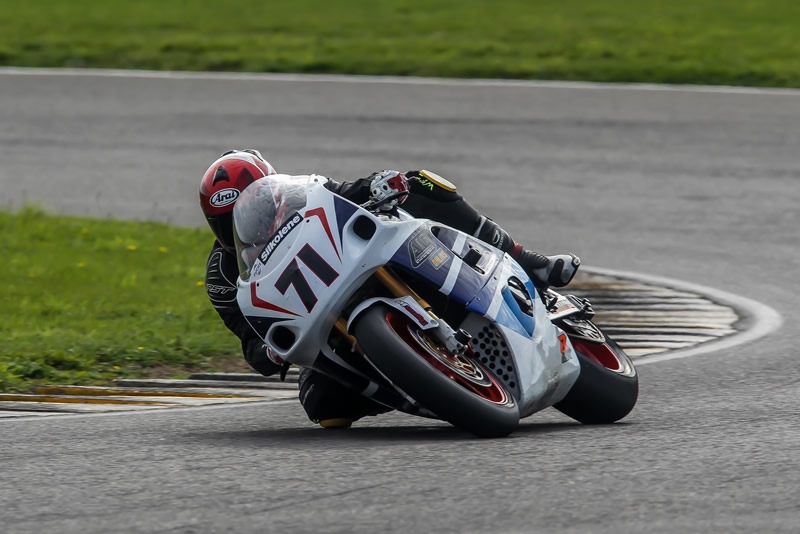 Getting to grips with different rear tyre, meant I really could chuck the SRAD on its side.

I got a cracking start and shot out alongside Shane Pearson and his brother Jamie on their R1, GP1 Classics. Blimey, I thought, if I can stick with these two I’ll be laughing. We were three abreast at one point going up to Rocket. I pushed the Suzuki to the limit at every point on the coastal circuit, but after challenging the pair of them, I out-braked myself and they pulled away just in front. It was unfortunate because it allowed Ryan to come pass me too. I went from second overall position - behind Jamie Pearson - to fourth. Damn! And, there was another 6 laps to go!

It was a cracking 12-lap race and I got in front of Ryan again on the corner before the downhill corkscrew section on the last lap. Unfortunately, I ran into the corner a little too hot making the pass and couldn’t hold a tight enough line on the exit to stop him from re-passing me. All that was left was the corkscrew, a section of the track where I’ve always been good at overtaking. I knew that if I was close enough on the last lap of a race, I would always have a good chance to pass there. Then, just as I was about line up the move into the corkscrew, there was a back-marker right in front of us. I knew I couldn’t go past him without risking an accident, so I had to settle for second. It was a bit disappointing after so much effort. 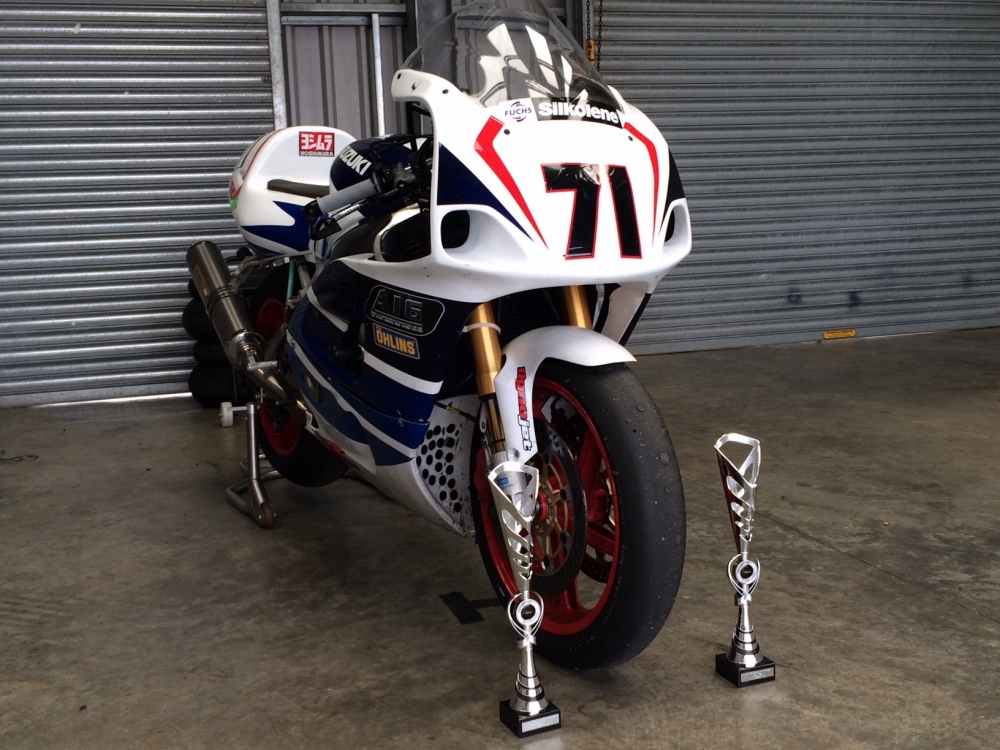 Standing proud, the Suzuki with a couple more trophies on the last day.

Still, thanks to Drew – for trusting me with the bike – Vince Carlton, Matt Pearson, Martin Stanier and his son Zach, who all helped with good advice over the weekend, I managed to win enough points to keep my title hopes alive. If I hadn’t had the Suzuki I’d have been sunk. Also thanks to my friends Geraint and Julia for coming to watch and support me.

Although it was a tough weekend it was a nice place to be, the weather was good and at times it was good to catch-up and have a chat with some of the other riders in the paddock.

Now we’ll have to start taking the engine apart to see what the problems are and I’m confident that we’ll have the ZX7R ready for action for the double-points round at Oulton Park end of September.

Thanks again to everyone at Wiseco Piston Inc, Kais Suspension, R&G Racing, OPIE Oils, Cradley Kawasaki, CP Carrillo, TA-Creative, Holbeach Tyres and Nova Transmissions for all the help and advice.

See you all at Oulton Park for Round 8.