A WOEFUL WEEKEND AT OULTON 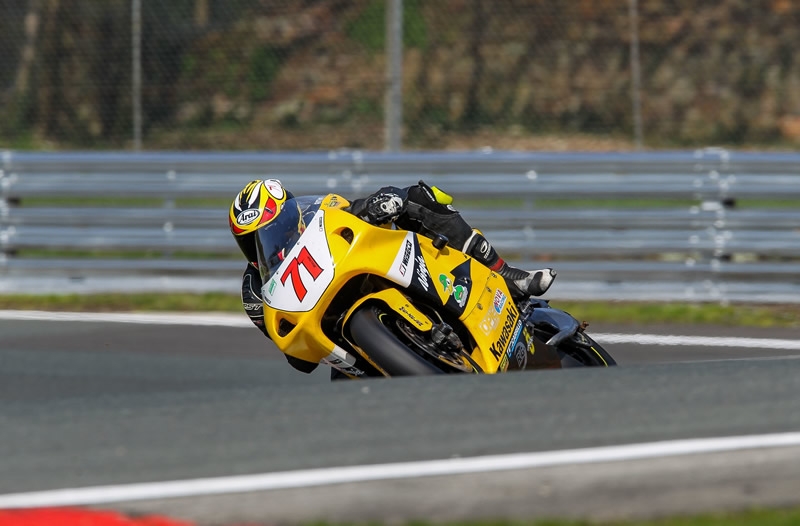 Oulton Park always has something in store for me. Looking back though, I can’t really say that luck – or the great racing spirit in the sky – was against just me this time. There were others that suffered misfortunes over two very hectic days.

Earlier in the week me and Dad struggled to get everything finished in time to travel up the long road north. We didn’t have a bike until Tuesday night; I wasn’t able to run it to test it until then. We were both very busy due to work commitments. Dad had to take the Thursday off work to finish preparing the bikes because we wanted to take two with us this time; it was just as well we did. 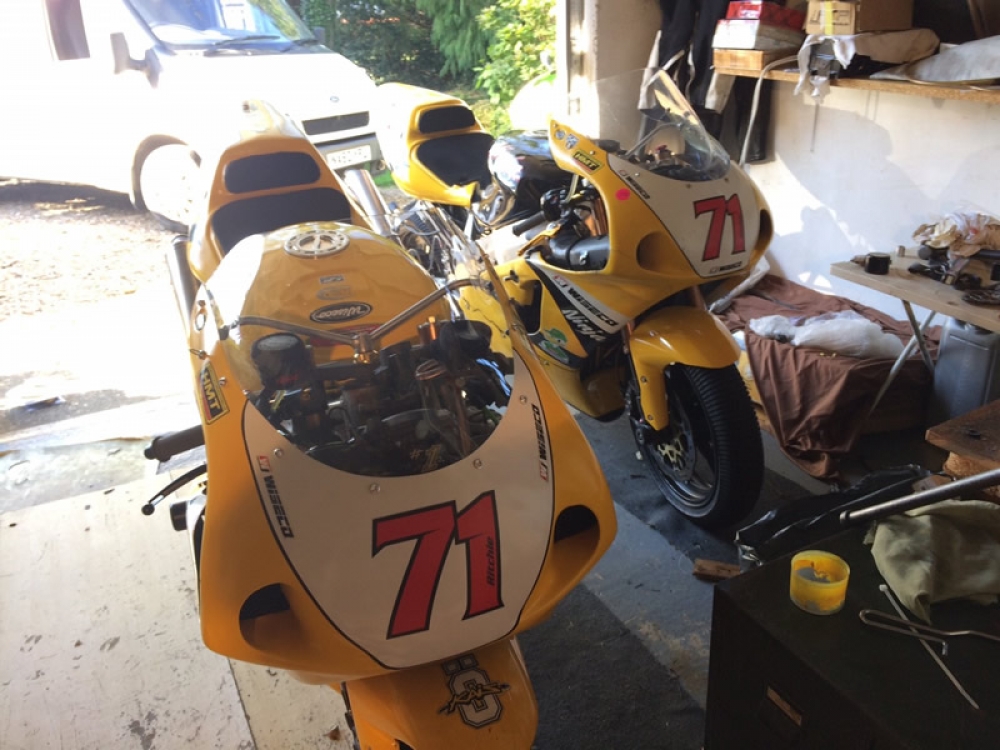 Two bikes almost ready before we loaded up on Thursday evening.

We set off on Thursday night at around 8 o’clock in the evening and arrived at the circuit at 1.30 in the morning. Quite possibly the worst journey with motorway closures, road works and detours we’ve ever had, and – believe it or not – a house fire near Telford shut the main road. With the Police and Fire Brigade attending, we had to turn around and drive back to the motorway and start again. By the time we got to sleep at the circuit it was about 2.30 in the morning. We had to be up at 6 to start work on the main bike, which still wasn’t track-ready.

Friday practice was hard work. We were all exhausted before we even picked up a spanner.
Still, me and Dad rolled our sleeves up and with Mum sorting out the drinks – plenty of tea for Dad – the toast and bacon sandwiches for breakfast, we got stuck in. In the first session, the flat-side carbs were over-fueling; petrol was blowing out of the air-box on the overrun and going everywhere. With time short between sessions I just took the carburettors off the other bike and swapped them over. 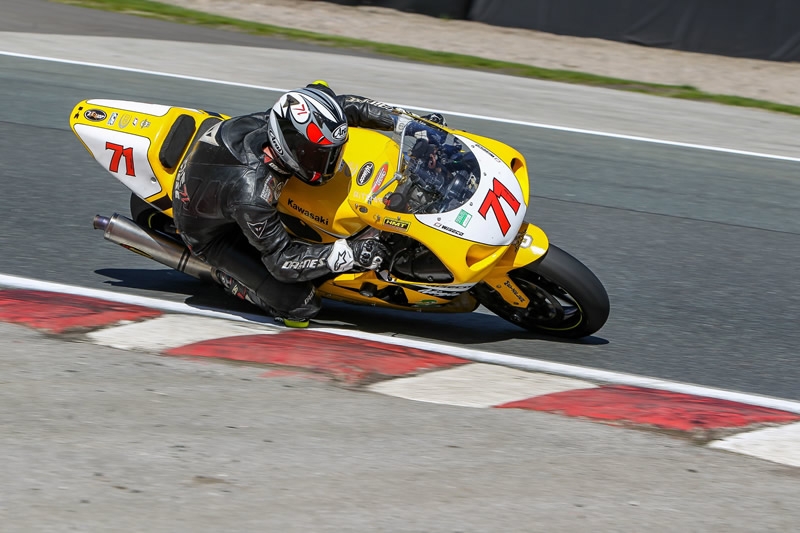 Practice was on and off all day with red flags and me in and out of the garage.

The second session was OK, but a red flag cut it short. The third session, just before lunch, we noticed that the cam cover seal had started to leak oil, so we took everything off, cleaned it and resealed it. Then the clutch started slipping so I changed the clutch plates and, while everything was out with the oil drained, I changed the oil pump. (I was still feeling nervous about the oil pressure running on the low-side) With such a lot to do, I had to miss a session and it was only at the end – the last session of the day – that I was able to concentrate properly on riding the circuit. 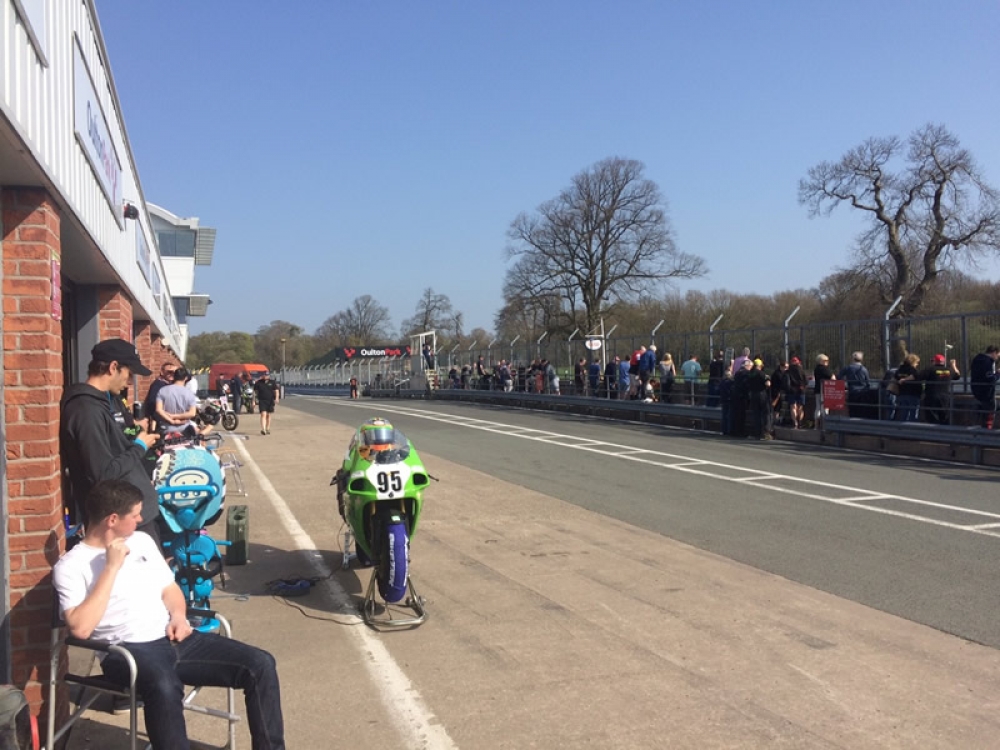 Two lovely days to practice and race, even Jordan Watling’s bike next door, was basking in the sun.

We were sharing a garage with our closest rival Jordan Watling and his team, they were having problems, too. Like us, they didn’t really get much practice time through one thing or another. We were making jokes about the Kawasaki’s competing for attention. We’re never short on laughs with Jordan’s family and his mechanic Will.

It was an even worse day for Andy Meachin. He crashed badly and was rushed to hospital where he had to have scans on his spine. I heard that he’d actually fractured his vertebrae and needed surgery. If you’re reading this pal – get well soon. I was glad when the day was over and we were all able to get some sleep at last. I needed to be on form for qualifying.

The qualifying session on Saturday morning was good. The weather was perfect, the sun was out again and it was nice and warm for a change. I put my ZX7-R on the front row with a good, solid 1:45 time and first position for my class.

Unfortunately for Jordan, he crashed at Lodge corner and had a lot of work to do to prepare his bike for Race 1. Then I saw Sam Cox, who rides in the GP1 Classics on his Suzuki GSXR750, he said that his gearbox had broken! What is it about Oulton? Quite a few of us seemed to be having more than our fair share of unlucky moments. Luke MacRae had his 600 Golden Era Superport spare bike at the circuit and allowed Sam to ride it for points. Being a double-pointer everything counts. However, in the race poor Sam had a DNF and scored nothing.

In Race 1 our warm-up lap was red flagged. My pal, Mark Biswell, had uncharacteristically lost control of his Triumph at Shell Oil’s hairpin, knocking himself out! More bad luck being dished out. He’d only just returned with his rebuilt engine too, we all felt very sorry for him. Then Greg Lewis had to be pushed off the circuit because his Yamaha wouldn’t fire up after the long wait to restart. It was endless, double points rounds are a nightmare really! Why we can’t have the normal points scoring per race and have less of a total at the end of the season escapes me. I wonder how many other riders feel the same? 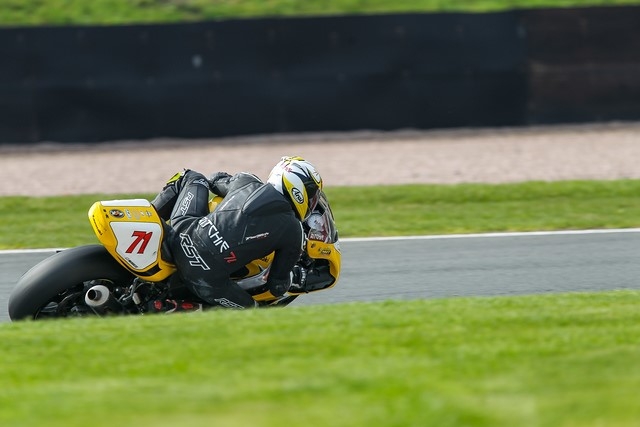 After a good start, I took an early lead in Race 1.

Anyway, when we eventually got under way, I got off to a great start and went into the lead straight away. There was only Ryan on my tail on his GP1 Classic R1. He flew past me on the straight about half way through. I was able to stick with him though, maintaining good corner speed and braking a bit later than him. I even had a few chances to pass on the brakes, but I didn’t want to do anything silly. Double points for the class win were more important than an outright win. I crossed the line just behind Ryan, but more importantly over 9 seconds ahead of Jordan in the Golden Era SBK class. It felt good to win again, I felt exhausted, worn out, and was pleased it was shortened to 7 laps. I think the lack of sleep and the heat were beginning to take it out of all of us. 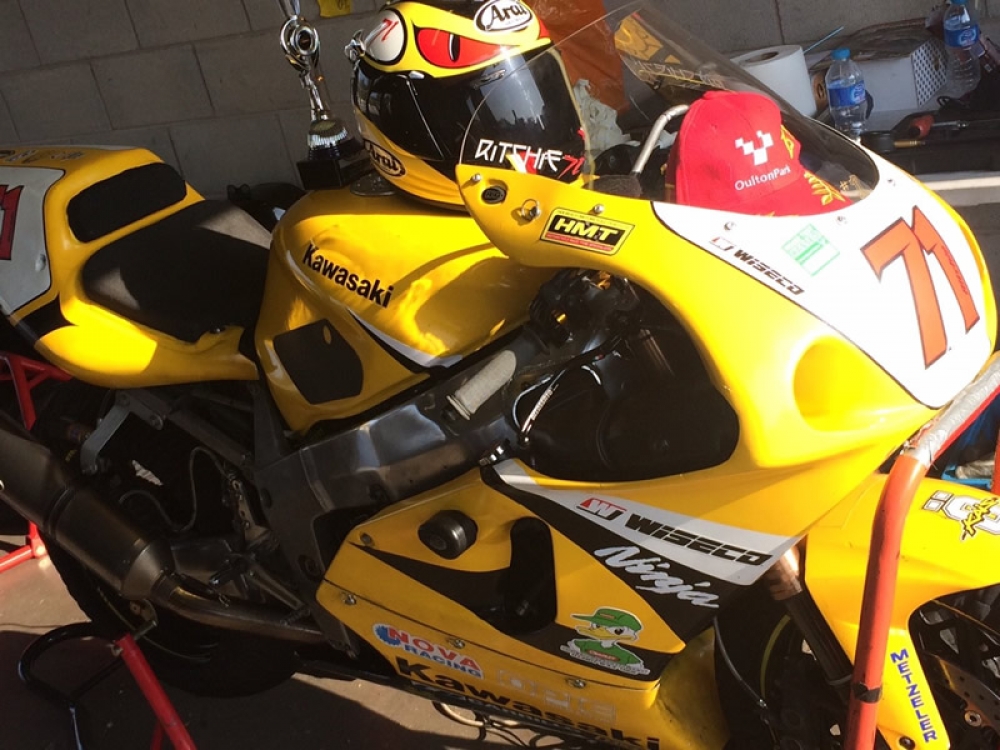 Happy for the time being, our ZX7-R catches a few rays, after winning Race 1, waiting for Race 2 as the sun streams into garage number 10.

Ryan told me in Parc Ferme that he could see a bit of smoke coming from around the exhaust so me and Dad thoroughly checked it over after the race and discovered that it was a tiny oil leak dripping on to the exhaust. It was coming from the oil pressure sensor I had fitted. We tightened it up and lock wired it, but it was a time bomb really; it was going to let me down on lap one of Race 2.

When I set off I thought to myself, ‘Right I’m going for the lap record here’. The conditions were perfect, I had clear track in front of me and the bike was going really well after we’d rebuilt the motor.

I took the early advantage, right from the start, and was well ahead when disaster struck. I could see all the Marshalls waving at me to move over, I thought there was something on the track at first, but when I looked behind me I knew exactly why. Smoke was coming out of the back of it like a jet’s vapour trail! I left the track immediately, but I felt sick; losing 50 points in one go is hard to take. When you think, I’ve won 5 out of 6 races and I’m second in the championship. Doesn’t seem right somehow. 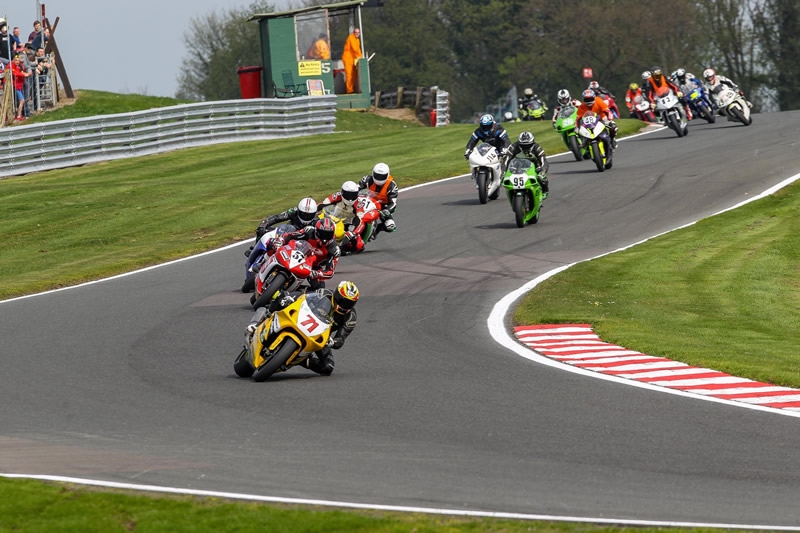 Charging ahead, I was all set for a double victory, when a leak from an oil pressure sensor literally stopped me in my tracks.

All I could do was watch the remainder of the race, while standing with the Marshalls, and it was good to see my garage pal Martin Stanier having a ding-dong with Ryan Strafford up front. He was in the lead on the penultimate lap and I thought he was going to win, but had to accept a very close second place in the end.

Jordan and his team took the SBK win and the points, which has now left me 16 points adrift in the championship with a lot of work to do to catch up.

I left Oulton with mixed feelings, sure I was disappointed, but my Dad was pleased that the Marshalls were able to stop me in time before the oil leak spread to my rear tyre. He said it was awful to see me going like a bat of hell not knowing what was going on behind me. A crash, in some places, at a track like Oulton doesn’t bare thinking about.

I’ll be looking forward to Cadwell Park now to try and make up lost ground. It’s a circuit I like and one that Jordan knows well too, so it should be a good battle. I hope all the other guys can sort out their problems too, it would be nice for us all to have a relatively trouble-free meeting for a change – we’ll see.