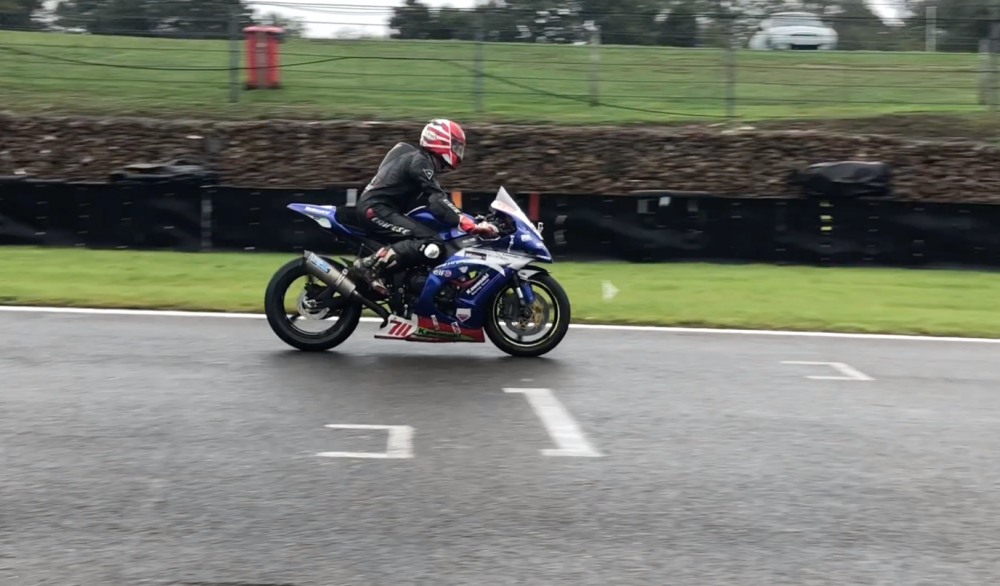 The forecast was for a very wet and windy weekend, and for once – unfortunately – the weather forecast got it right. Having had so much wet practice in Cartagena earlier in the year and at Donington Park last month on the ZX10-R, I thought I’d be pretty much set up to take the fight on for the second spot at the Brands Hatch GP Circuit in the last round of Bemsee’s Reactive Parts MRO Powerbikes Championship.

Well, I had all day on Friday to practice in the wet on the short Indy track so I wasn’t too bothered. It didn’t stop all day, and at times it was like riding through a ford, especially at the bottom of Paddock Hill, and at Graham Hill Bend the water was running down the approach to it like a river. 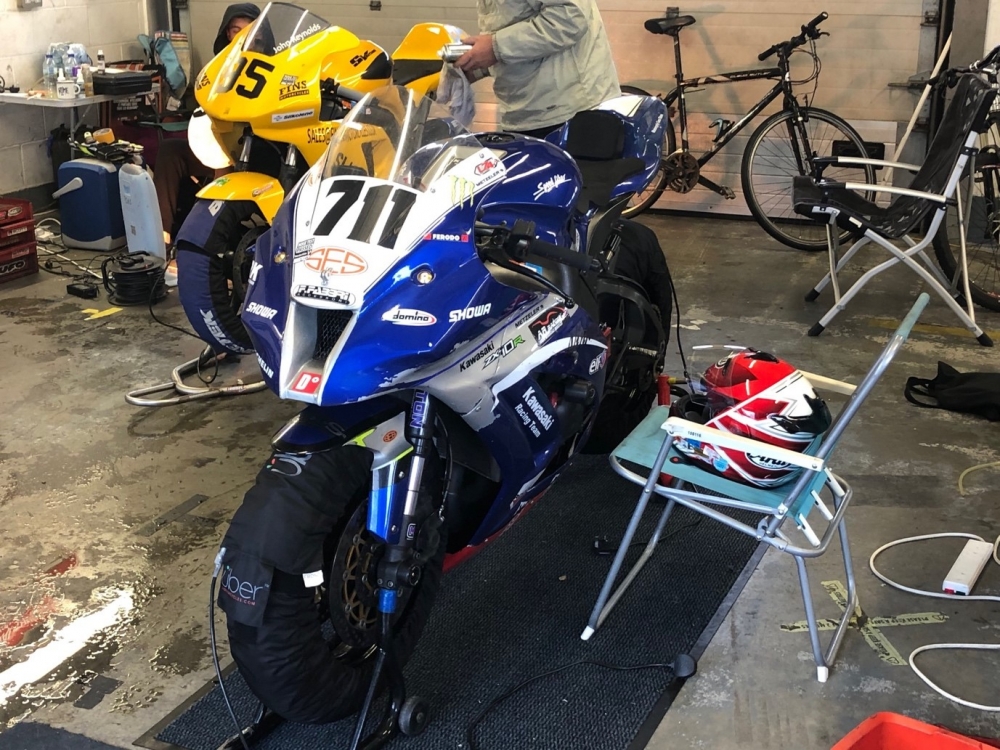 Taking no chances, I decided to run with the old fairing over the wet weekend…

Anyway, to start with we had a few problems with tyres. I had a couple of good Dunlop rears from the old ZX7-R left over from last year, so I decided to swap one of them after the first session for the very worn Pirelli that was already on the bike. We had to run through the pouring rain with the rear wheels to the paddock for A&R to change the tyre, which they did really quickly. When I went out in the second session the bike didn’t feel right. It was shaking from side to side when I put the power on. The handlebars were shaking wildly the faster I went; the bike was unrideable, so I came in after only one lap. Scratching our heads, we decided that it must be the tyre… as that was the only thing we had changed. 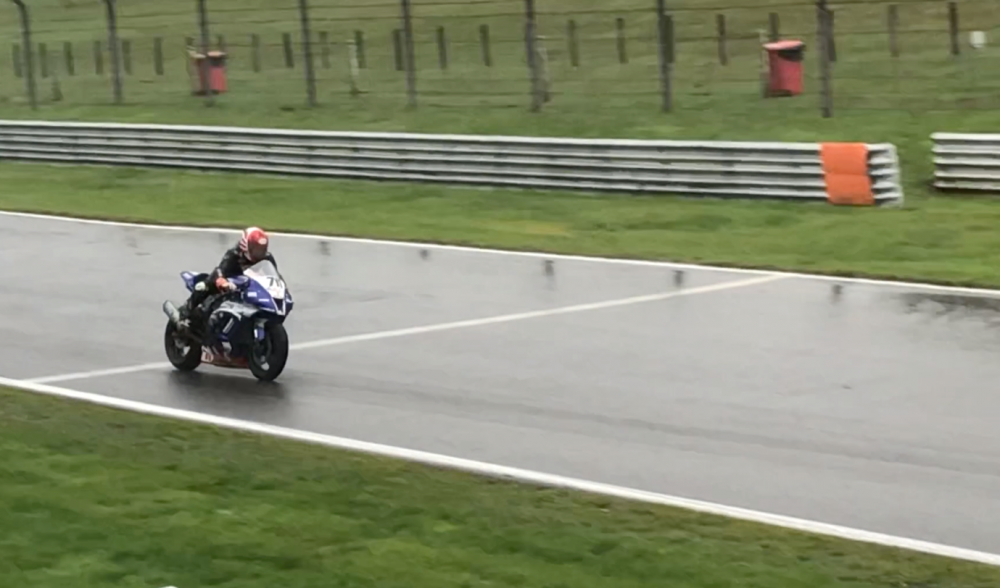 The ZX10-R was a right handful shaking its head from side to side…it was saying. “NO!”

Me and Dad discussed what we should do and decided that the Dunlop rear might not be compatible with the Pirelli front. Anyway, with valuable track time running out I decided on splashing out on a new Pirelli. It was a bit sickening having to pay £200 for a tyre when I had good Dunlops in the back of the van! With the tyre changed the bike felt better, no shaking. I changed a few things to get the best I could out of it without sliding off, but I was still struggling with grip in the corners and not going as quick as some of the other lads. Anyway, I felt pretty good about Saturday’s qualifying on the longer GP circuit which, according to the weather forecast, was going to be just as wet and after a night of constant rain drumming on the roof of the caravan, it was! 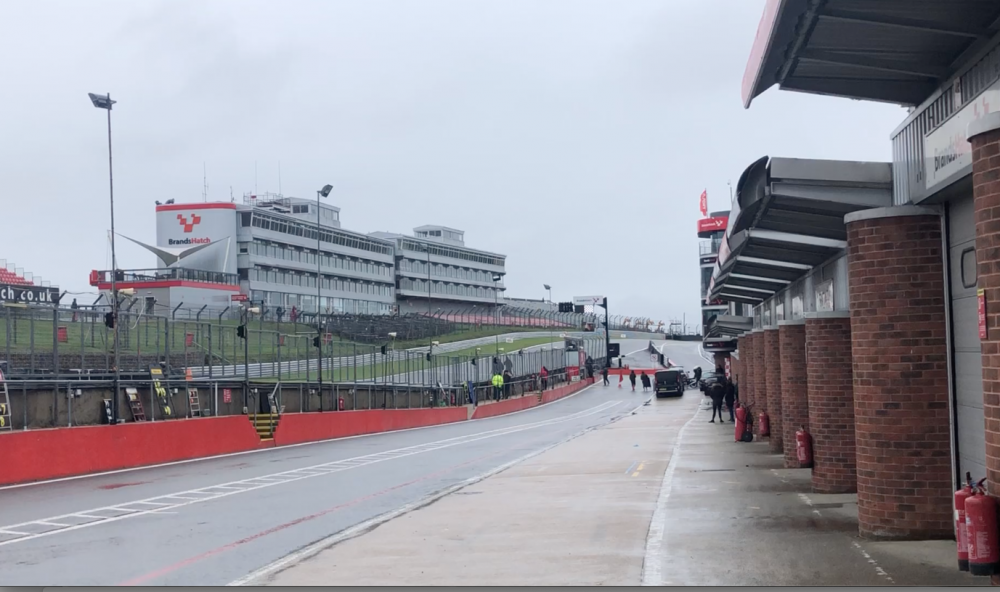 Saturday was no different, but it did start to dry out a bit for our race…

Saturday, I woke up to just light rain, so at least the track was just wet and wasn’t the running river like the day before. After a few laps to familiarise myself with the longer track I decided to push on, but I was getting stuck in a bit of traffic and as my pit board was giving grid positions back on the 4th row, I thought, “I can’t have this,” so I dropped back to give myself a good run on the final lap and shot up to P4 with a 1:48.3 lap. Glenn Walsh was on pole, and on form, with a 1:45… he was clearly confident on a wet track and would want some beating with a time like that. 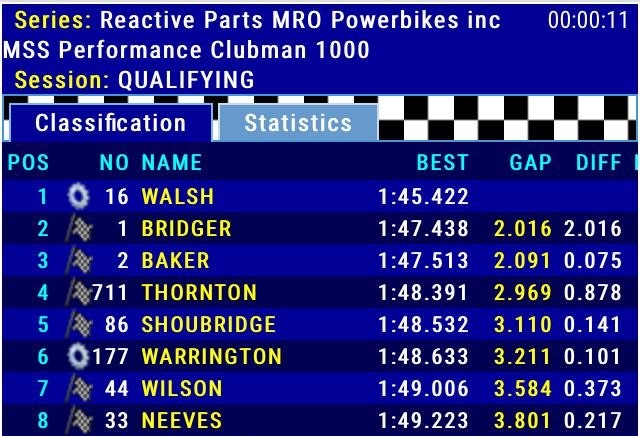 A little later, I was surprised to see the rain easing off and it eventually stopped about mid-morning. Our race was number 4 on the list and after so many crashes and stoppages to delay us the track was beginning to dry out. I said to Dad that it was time to get the warmers on the slicks to be ready, just in case. Well, I left it as late as I could and when I saw Clearways drying out I made my choice. I don’t think me and Dad have ever changed the wheels so quickly, even though Dad forgot to put the spacer in the rear wheel we still managed it ¬– with Mum getting stuck in as well – in about 5 minutes. When I got out on the start line there was only one other rider on slicks, everyone else was looking at me like I was insane! After the warm up lap, I felt like I might’ve got it wrong, it wasn’t as dry as I thought it would be having listened to the riders who had been out in the race before. Anyway, I’d made my choice – there was no going back. Inters would’ve been perfect and a few of the other lads had gone for that option. The rest were on wets or a combination of both.
I got off to a fairly decent start, with Mark Bridger, but when I got to Graham Hill Bend – not an easy corner at the best of times – I had to really go easy and it was there I lost time and the riders on wets and inters came past me. I could recover everywhere else and get them back throughout the rest of the lap, then I’d be passed again slowing up for Graham Hill. After a few laps the tyre started to get nice and warm and towards the end of the race I was going just as fast as the lads in front. On the last lap I was catching them, if only I had another couple of laps to go I would have caught them up. It was a gamble that only paid off at the end, but it was good fun and I finished in 6th place, which put me on P3 for Sunday’s races.

On Sunday morning it had started raining again and it was heavy. Just to make things more awkward, the warm-up session was cancelled due to the amount of time lost on Saturday with all the accidents and very long delays. So, the later races from Saturday were pushed over to Sunday morning instead. It was bit annoying because I wanted to try out a different suspension setting for the wet track. Anyway, I decided not to change anything for the first race of the day. The problem I was having with the Pirellis was the fact that they didn’t really warm up until about halfway through the race, and with only 10 laps you lose so much time waiting for them to heat up. I usually put the warmers on Pirellis for about 15 minutes before I go out, but by the time we got started on the warm up lap they were cold again. In fact, I went completely sideways and nearly ended up in the gravel at Paddock on the warm-up lap! Not good for confidence. With the rain still coming down I got away fairly well and stuck it out for the first few laps with the bike moving around quite a lot to begin with, but once again I was much faster toward the end, setting a good time to put me P4 for the last race of the day, which was another gamble.

I had a rethink about the tyres and decided to put on the Dunlop tyres that I had in the van; both front and rear for the last race. The reason was that when one of the guys at A&R, who was changing the rear tyre earlier, had noticed some friction marks on the rear brake disc, like it had been grabbing on and off. Dad told me that he’d had trouble with the rear brake putting in the wheel so we convinced ourselves that this may well have caused the bike to shake its head in Saturday’s practice. In a way this kind of made sense, because mixing and matching tyres shouldn’t really cause a bike to shake like it did. As it was only the cost of a tyre change I had nothing to lose, so I went for it.

Back on the start line for the last race of the day I was keen to see how the Dunlop tyres were going to behave on a very wet track on my ZX10-R. Dunlop wets on the ZX7-R have always been good and it was something I was actually looking forward to even the though the weather was dreadful and my leathers were soaked right through. The warm up lap confirmed that it may well have been the brake pads that caused the shaking as the bike felt planted, straight and true.

When the lights went out, I got away well again and was hanging on to the leaders. The bike cornered well with plenty of grip, and I thought this is better, until I put the power down and the rear wheel just started spinning and the traction control kept cutting in. The bike was stuttering and slipping on the run out of Surtees on to the long straight, it just would not grip and I was passed by quite a lot of riders. God, I felt like coming in as I was literally going backwards. By the end the first lap I was about 10th! Not one for quitting, I tried to ride around the problem by being a little easier on the throttle on the exit. I was still losing time though, but I could make it up on the brakes and with my faster corner speed. I was knee right down everywhere with plenty of side grip and that’s where the Dunlop tyres were really good. I just couldn’t understand why they would not grip on the fattest part of the tyre when it was upright. Still I managed to have a good scrap with my old mate Chaz Beale who I’d not seen for a few years. We used to compete against each other in the GSXR 600 Trophy Series years ago.

If you want to see the race click here: 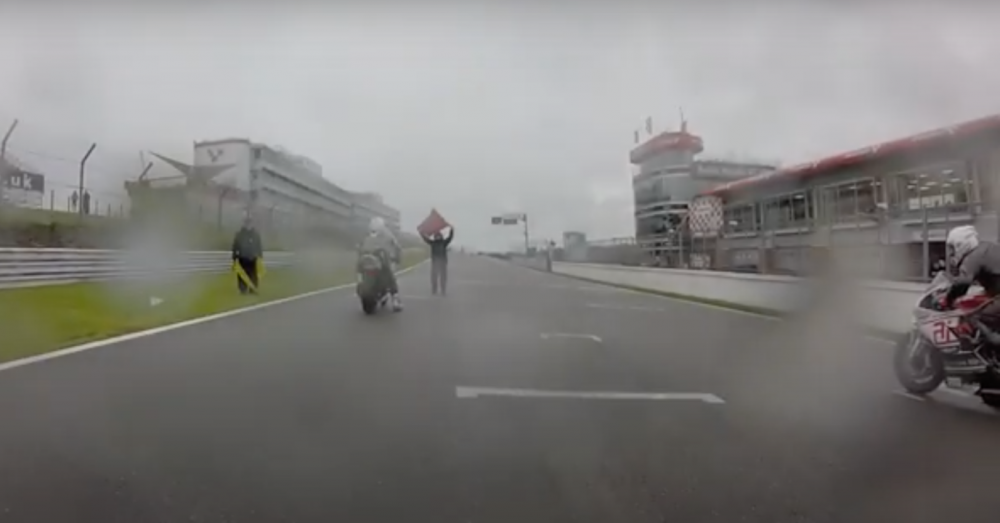 At the flag it was disappointing to finish in 7th place as it wasn’t good enough for me to hold on to second place in the championship and to be fair to Glenn Walsh, he was unstoppable in the wet and he nicked second spot by just 4 points. The irony is, he was the one who knocked my brake lever off at Cadwell Park forcing me to retire, if only… Ahh well, that’s racing – always throwing curve balls. 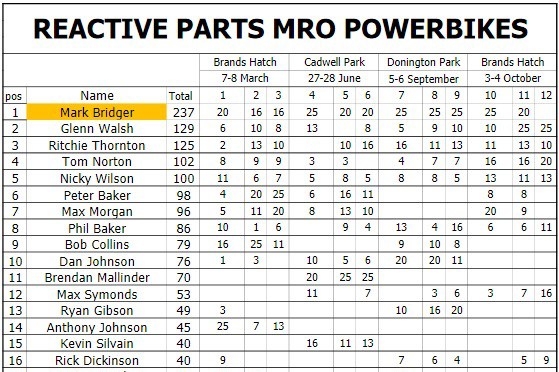 I was quite happy with 3rd spot in a very competitive and powerful class.

Still, I’ve got to be happy with a 3rd place. At the beginning of the year I was thinking top ten would be an achievement in this class. Although it’s been a short season it’s been a good one for me learning more about racing a powerful 1000cc machine. It’s something I’ve always wanted to do and most of the time it’s been good fun. Even when I’ve not done so well, I’ve learned something new. I’ve met some of my old pals and made some new friends along the way and next year I will be racing it again that’s for sure. Not sure where yet, but I’ll start by refreshing the motor in the ZX10-R and getting it ready for 2021. Hope to see you all next year, wherever I decide to race.